The European chafer (Rhizotrogus majalis) is a turf pest that arrived in New Westminster two decades ago. Since that time it's moved through Burnaby and other Lower Mainland communities, destroying lawn turf.

Chafer beetles emerge from lawns and lay eggs, which hatch into grubs that feed on grass and may move into vegetable patches to feed on other plants if food is scarce. The damage this causes–slow growth and yellow patches–is compounded by the visible damage created when skunks, birds and raccoons pull back your lawn to get at a meal of grubs.

The European chafer completes its life cycle in one year. Adult chafers (beetles) swarm in mating flights on warm evenings in June and July. The beetles usually fly to tall, vertical structures to mate. However, this isn't the time when they damage your lawn.

The mated females return to grassy areas to lay eggs in the soil. Eggs hatch in June to early August. The grubs begin feeding on the fibrous roots of grass while above the ground, birds and animals tear at the grass turf to eat them. 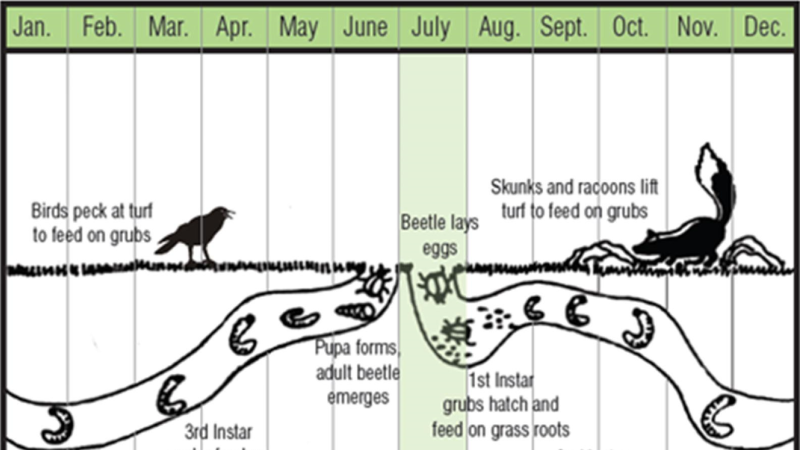 How to protect your lawn

The European Chafer is an exotic pest with few natural predators to control its population. It's here to stay, but with healthy lawn care practices, alternative groundcovers and biological treatment, you can control the damage this pest causes on your residential property.

The soil beneath your grass can become very compacted. In early spring, use an aerator to punch 3-inch deep holes throughout your lawn, loosening the soil and allowing for better air circulation and absorption of water and nutrients. Water your grass thoroughly but less often to get the roots growing deeper into the soil. Use fertilizer in May when shoot growth begins–it peaks in June/July and again in September. Reuse grass clippings or compost them to add more nutrients to your grass.

Raise your mowing height to 6 to 9 cm (2.5 to 3 inches). Chafer beetles prefer to lay their eggs on closely cropped lawns. Raising your lawnmower grass blades will also help to protect the soil surface from water loss during the summer, and encourage deeper root growth.

You can consider alternatives to grass There are many very attractive varieties of groundcover plants that cover an area just the way grass does. They require little maintenance, especially if you add paving stones for high-traffic areas. The other alternative is moving towards a more mixed-grass lawn that includes a variety of fescue grasses, Dutch white clover or micro clover that are more resistant to Chafer beetle infestations.

BTG is a relatively new microbial product that suppresses pests like the European Chafer beetle. Its active ingredient–Bacillus thuringiensis galleriae– kills larvae or beetles when they eat it. You can purchase BTG products like BeetleGONE! and GrubGONE! at locations where garden supplies are sold. Since the treatment isn't water-intensive, you don't need and won't qualify for a lawn watering exemption permit. Like nematodes, BTG products aren't harmful to people, pets or wildlife.

One of the most effective solutions are nematodes–'good worms' that feed on the larvae of these pests.

According to studies, the most effective biological measure was the H. bacteriophora nematode (or microscopic roundworm)–a “cruiser” species native to BC that actively infects and kills white grubs, such as the European chafer grubs.

Applying nematodes is most effective in late July, after the European chafer eggs have hatched, when the young grubs are most vulnerable to nematode attack. Nematodes are not a preventative measure. Rather, they control chafer beetles that have already laid eggs in your lawn.

If you need a lawn water exemption permit you can apply for it through our online portal or by completing an online fillable application form and emailing it to [email protected].

What is the City doing?

The City is managing European Chafer in priority areas, such as parks, greenways and main arterial boulevards, following the best management options noted above.

The City reviews the impact of Chafer beetles annually to determine if we will present a nematode package subsidy program. Check back to this webpage in the new year to see if the Nematode program will be offered in 2022.

For other inquiries, or to report the European chafer: